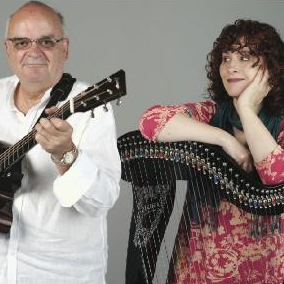 The virtuoso partnership of England’s premier flatpicking guitarist and “the greatest Celtic harper of our age” (LIVE IRELAND) has by now brought its unique musical vision to twenty-two countries on five continents.Chris and Máire have performed at over 175 folk, Celtic, arts, harp and guitar festivals in Europe, the USA and Australasia and have given almost two thousand concerts in venues large and small – from the tiniest of historic churches in England, Germany and Italy to palaces in Kyoto and Istanbul, London’s Barbican, Sydney’s Town Hall and the Philharmonie in Cologne. Together they have created one of the most distinctive voices in modern acoustic music. Their six duo and five solo CDs, instructional books and collaborations with many other luminaries of the Celtic, folk, swing jazz and bluegrass worlds express both the depth of their commitment to tradition and an eternally playful, curious and adventurous spirit.