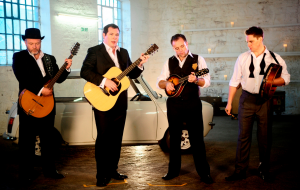 The High Kings are a traditional folk group who are among a wave of modern acts bringing classic Celtic songs into the 21st century. The High Kings is an Irish folk group formed in Dublin in 2008. The band consists of Finbarr Clancy, Brian Dunphy, Martin Furey and Darren Holden. By February 2015, the group had released three studio albums, two live albums, and two live DVDs. All of their studio albums appeared at number three or higher on the Billboard world music chart, the first two went platinum in Ireland, and all their albums charted in Ireland.

After the release of their first album, the new group moved from a highly staged format to a more natural performance style. Since the inception of the band, The High Kings has toured Ireland, the United States, and Europe on multiple occasions. Together they play thirteen instruments during their performances. The group’s motto is “Folk ‘n Roll,” and their singing is especially noted for its close harmonies.