Presents the BOOKENDS tribute to

Looking to do something fun and different?  Do we have a deal for you!

As its spring fundraising event, Spanish Peaks Celtic Music Festival
is pleased to present the International smash-hit show
“SIMON & GARFUNKEL THROUGH THE YEARS” by Bookends.
See details below. 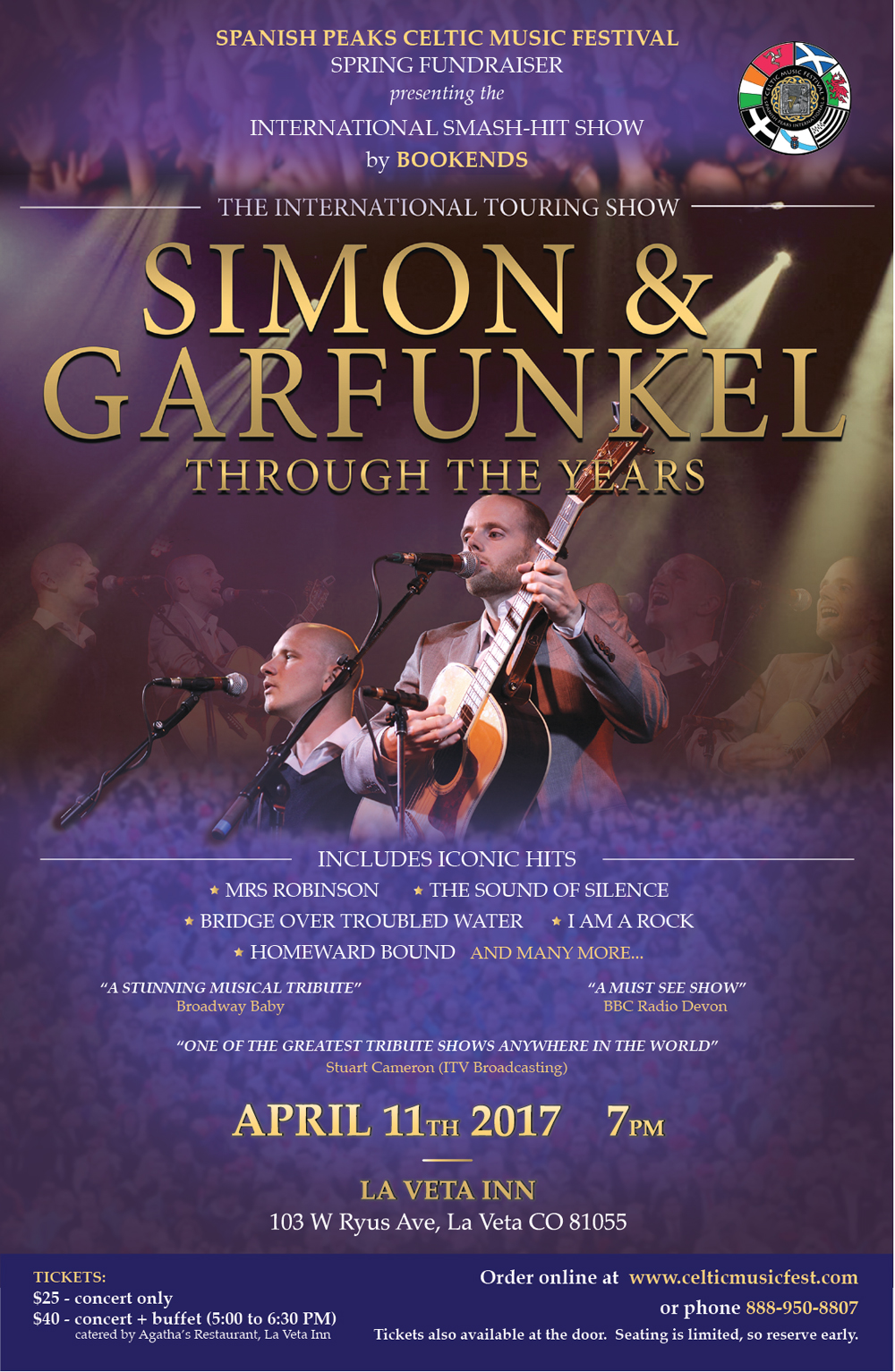 Ryan and Ali at La Veta Inn are hosting the event and offering a pre-concert buffet dinner with a special menu from 5:00 to 6:30 pm.  A limited appetizer menu will be available after dinner for concert goers and patrons.

Come enjoy great music and good food in a warm and welcoming atmosphere,
all while supporting your Celtic Music Festival.

The Bookends duo of Dan Haynes & Pete Richards perform the most authentic-sounding tribute to the unforgettable music of Simon & Garfunkel.  Their international touring show has been described as “simply breathtaking.”

Rendering the songs in a truly captivating way, their delicate recreation of the unmistakable sound of the American folk-rock duo is something of a masterpiece and has taken Bookends to prestigious venues in the UK and America.

“One of the greatest tribute shows anywhere in the world” – Stuart Cameron, BBC and ITV Broadcaster

Join us and be treated to many of Simon & Garfunkel’s greatest hits such as “The Sound of Silence,” “Mrs Robinson,” “Homeward Bound,” and “The Boxer” plus Bookends’ own beautiful rendition of the unforgettable “Bridge Over Troubled Water.”  With early folk gems such as the haunting “Sparrow” and wonderfully poetic “Bleecker Street” alongside music of Simon & Garfunkel’s solo careers, the concert is must see for any music lover.

The Byrne Brothers are a multi-award winning family band and Irish dancers from Dublin and one of the biggest names in traditional Irish music today. They are Luca 18 on... END_OF_DOCUMENT_TOKEN_TO_BE_REPLACED

After first appearing at the 2018 Festival, Patsy O’Brien has become a Spanish Peaks regular.  It is likely because Patsy’s talents are so unique, truly inhabiting a niche of his... END_OF_DOCUMENT_TOKEN_TO_BE_REPLACED

Back in 2018 the Spanish Peaks Celtic Music Festival was thrilled to have two fabulous musicians attend: flute and whistle player, Kevin Crawford and fiddler Collin Farrell.  Both play with Lúnasa, the band... END_OF_DOCUMENT_TOKEN_TO_BE_REPLACED