Ed Miller is returning to the Spanish Peaks Celtic Fest this year, and will be joined by longtime collaborator Rich Brotherton.

Ed Miller has been hailed as “one of the finest singers to come out of the Scottish Folksong Revival” and as “one of Scotland’s best singing exports.” Miller will return to Spanish Peaks Celtic Fest September 19-22 for another week of teaching and performing. Over the past 15 years of the festival, Miller has only missed his “favorite event of the year” a couple of times. The Fest is delighted to have him return, and his passion and commitment to the Fest has earned him a role as a “Resident performer/instructor”.

This year he is extra excited, as he will bring his longtime friend Rich Brotherton. “He’s played in all my CD’s and is a wonderful musician who can play anything with anybody” said Miller of Brotherton , who also has Singer, Producer, Composer, Arranger, Engineer, Mixer on his resume. Sharing the enthusiasm to reunite with Miller, Brotherton said “Ed and I have been musical cohorts for more than thirty years at this point, though our availability to tour was hampered for many years by my work in Robert Earl Keen’s band. Now, though, I’m off Robert’s bus and free to work more with Ed. I’d be delighted to play the Spanish Peaks Fest with him this year. I’d also be happy to do a workshop on Celtic guitar or cittern or octave mandolin if that helps”. 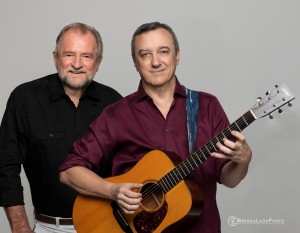 The two men met while living in Austin Texas. Miller, originally from Edinburgh, moved there to attend the University of Texas, where he earned graduate degrees in Folklore and Geography. Brotherton, originally from Augusta, Georgia, graduated with a music degree from Colorado College, Colorado Springs, and made his way around the country following musical pursuits until he landed in Austin.

They shared a “first” together as Brotherton produced Miller’s first record, which just happened to be Brotherton’s first attempt at the art! According to Brotherton, Miller was painting houses at the time in 1989 when Brotherton approached him about making a record. Brotherton, after working in Colorado College recording studio and a class in electronic music, felt he was good to go. Miller’s record Border Background was put together, and it was the first project to feature Brotherton’s playing, production and arranging extensively.  Now, nearly thirty years later, they have recorded Follow the Music together.

Although their Festival schedules are not yet set in stone you can be sure to see them perform together in addition to providing personal instruction and demo/workshops.  Stay tuned for more info.

The Spanish Peaks Celtic Festival would like to wish our followers the most joyous holiday season! This is a very special time of year for us – this is when... END_OF_DOCUMENT_TOKEN_TO_BE_REPLACED

November 11, 2022 For Immediate Release: We are pleased to announce that the 2023 Spanish Peaks Celtic Music Festival is planned for September 21–24, 2023.  Located at the foot of... END_OF_DOCUMENT_TOKEN_TO_BE_REPLACED

A hearty THANK YOU to all of the supporters and friends of the Spanish Peaks Celtic Music Festival!  This year’s festival was (according to many of the attendees), one of... END_OF_DOCUMENT_TOKEN_TO_BE_REPLACED

To all of our loyal Spanish Peaks Celtic Music Festival Supporters: We are just a few hours away! In order to have time to create our class rosters, we have... END_OF_DOCUMENT_TOKEN_TO_BE_REPLACED