You Won’t Find This in Your Schedule, But Take Note

You Won’t Find This in Your Schedule, But Take Note 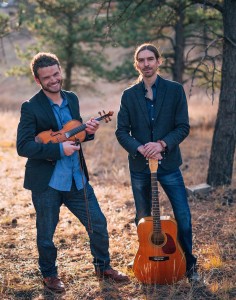 Many of you have had the privilege of listening to Jon Sousa and Adam Agee over the years.  We certainly have at the Spanish Peaks Celtic Music Festival.  Recall the 2012 Festival when dynamic performers Martin Hayes and Dennis Cahill, a similar fiddle/guitar duo, seemed to embrace Jon and Adam musically on stage together.  One can imagine the impact that that connection had.  In the years since Jon and Adam seem to have soared musically, which is very evident in their 2018 release, “Ceol na gCarad.”

Martin Hayes, himself, has said the following: “Adam’s music has been familiar to me for many years… I’ve never heard him play a note that wasn’t sincere and from the heart. His music is true and free from pretense. He constantly seeks the deepest expression of the music.”

And Pat McCullough of Celtic Events and Entertainment, and the Celtic Connection, has said, “When it comes to the traditional Irish music genre, the names of Boulder-based Adam Agee and Jon Sousa are being echoed from Denver to Dublin. Having performed on stage with Irish music icons including Martin Hayes, Dennis Cahill, Robbie O’Connell, and John Doyle, the duo has been getting the attention they deserve. Their dedication and joy given to the tradition is abundantly evident, whether they are performing on stage or teaching their art to students of music.”

Well, this lengthy intro is leading up to something.  As they did in 2018, Jon and Adam will perform and teach this year, individually, together, and as part of Take Down the Door.  But there is more!  Last year they reached out to the Festival and asked if they could perform Sunday evening, after the Festival’s finale concert, and to do it for the public free of charge.  They promoted it as a donation only event at the La Veta Mercantile, and not the kind of donation only that comes with a suggested price.  The evening was successful in every way possible.

Jon and Adam have offered to do it again.  Sunday, September 22nd, 6:30, at the La Veta Mercantile.  Donation only.  You won’t find it in your schedule.  Your only obligation is to yourself, to be there and enjoy a beautiful culmination of the 2019 Festival.  This will be a concert not to be missed. 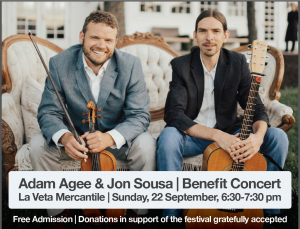 “This fiddler and guitarist from Colorado are creating waves across the States and beyond. Not only do they play the music of the Auld Country with sensitivity and soul, they also bring their own brand of modernism to the Irish tradition.”
—Irish Music Magazine

The Spanish Peaks Celtic Festival would like to wish our followers the most joyous holiday season! This is a very special time of year for us – this is when... END_OF_DOCUMENT_TOKEN_TO_BE_REPLACED

November 11, 2022 For Immediate Release: We are pleased to announce that the 2023 Spanish Peaks Celtic Music Festival is planned for September 21–24, 2023.  Located at the foot of... END_OF_DOCUMENT_TOKEN_TO_BE_REPLACED

A hearty THANK YOU to all of the supporters and friends of the Spanish Peaks Celtic Music Festival!  This year’s festival was (according to many of the attendees), one of... END_OF_DOCUMENT_TOKEN_TO_BE_REPLACED

To all of our loyal Spanish Peaks Celtic Music Festival Supporters: We are just a few hours away! In order to have time to create our class rosters, we have... END_OF_DOCUMENT_TOKEN_TO_BE_REPLACED