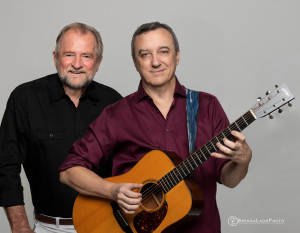 Today we continue our lineup announcements by happily welcoming back our longest “tenured” musician, Ed Miller, and his long-time partner in recordings and live performance, Rich Brotherton.  Ed first appeared in the 2006, “People of the Sea” festival, and counting last year’s virtual festival, has appeared in twelve of our sixteen years.  This year will mark Ed’s thirteenth.  Ed has been hailed as “one of the finest singers to come out of the Scottish Folksong Revival” and as “one of Scotland’s best singing exports.”  I recall my first experience listening to Ed Miller, and how he affected me.  His love of story and song of Scotland is palpable.  I felt that he honored every song, seemingly caressing every word, line, and verse.  His humor and warmth is equally matched by his knowledge of Scottish folk music.

Guitarist Rich Brotherton, also currently living in Austin, appeared at his first Spanish Peaks Festival in 2019, but has been performing and producing music with Ed since 1989.  In fact, Miller’s record Border Background was was their first collaboration, and Rich’s entry into the production craft, now Ace Recording.  Rich has also been playing with the Austin Celtic band, Úlla.  An extra treat this year will be the inclusion of Maddy Brotherton, Rich’s daughter, who has also become a full-time member of Úlla.  An award winning violin player since the age of six, it was at Lawrence University that she began to explore the fiddle, and embrace the Celtic genre.  She has studied with English fiddler Pete Cooper, expanding her technique and repertoire of tunes.

In addition to their other workshops and presentations this year, we are excited to present their “Artistic Concepts for Voice & Guitar,” a live demonstration of the process that Rich and Ed have been using to produce their collaborations over the past thirty years.  If you missed their virtual performance for the Festival last year, we encourage you to watch it still on our YouTube channel (photo excerpts below).

Back in 2018 the Spanish Peaks Celtic Music Festival was thrilled to have two fabulous musicians attend: flute and whistle player, Kevin Crawford and fiddler Collin Farrell.  Both play with Lúnasa, the band... END_OF_DOCUMENT_TOKEN_TO_BE_REPLACED

Dear Friends of the Festival: We are in the process of putting together a star line-up of performers for this year’s Festival. In the days to come we will be... END_OF_DOCUMENT_TOKEN_TO_BE_REPLACED

I have had a long history of working and volunteering at many events in the Denver area as well as coordinating many parades, most notably the National Western Stock Show... END_OF_DOCUMENT_TOKEN_TO_BE_REPLACED

Spring is just around the corner in the Spanish Peaks region. The grass is greening, the perennials are sprouting leaves and new growth, and we have tulips in full bloom. ... END_OF_DOCUMENT_TOKEN_TO_BE_REPLACED